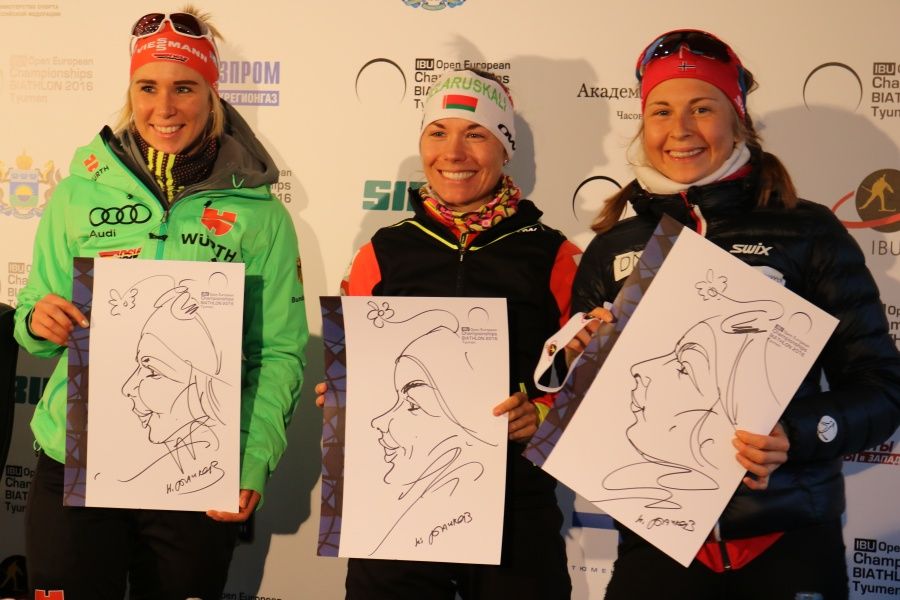 Nadezhda was starting fifth and demonstrated perfect speed and clean shooting on three shooting ranges. She missed two targets on the last shooting but still this was enough for her to be 1st at finish leaving all the rivals far behind.

“Today was a good day. I was not feeling well in sprint because of my long travel to Tyumen. I had a sleepless night and a flight delay in Moscow. But now I have already recovered and managed to show good performance in this race” – said the new champion of Europe.

According to Nadezhda Skardino, this is the first time she is participating in important international competitions just before the start of World Championships. Now she will be able to take part in them with high spirits and positive attitude.

Karolin Horchler of Germany finished 2nd. German biathlon was skiing quite fast and her shooting was good (only two missed targets). The real struggle took place for the 3rd position in the race. (2 промаха). Ingrid Landmark Tandrevold of Norway was competing with Anastasia Zagoruiko of Russia. Athlete from Tyumen was in top-3 during all the race, however, on the last meters of the distance she was chased by young Scandinavian biathlete.

It is worth noting that today the weather in “Zhemchuzhina Sibiri” was windy. Probably, this didn’t allow the majority of athletes to shoot clean. For example, the leader of Russian team in this race – Anastasia Zagoruiko – had three missed targets.

On the press-conference after the race one of the moist “speedy”cartoon artists of Russia Nikolay Rachkov presented his works to the winners of women pursuit.